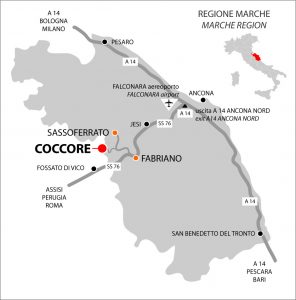 The village of Coccore is located between the cities of Fabriano and Sassoferrato (click on map to enlarge).

Drive to Fabriano and then take the road towards Sassoferrrato: SP16.
About 10 km out of Fabriano towards Sassoferrato, you will find signs to Coccore on the left side of the road in the middle of a curve.
Follow the festival signs to the top of the village where you will be shown where to park.

We will have a shuttle making its way from Fabriano Station to the festival every two to three hours.